February half term was a mixed bag. The weather was fine but my daughter had a nasty cold that laid her low. All she wanted to do was curl up and die. I saw no reason not to let her after a busy time at school.

However I had three adventures for us up my sleeve so I knew it wouldn’t be a total wash out.

First up was Speedwell Cavern just up the road in Castleton. I didn’t really know what to expect beyond what I had seen in the photos, but I knew it involved a boat in a cave – very Jules Vern! And a little cherry on the top was that Speedwell Cavern is right where Winnats Pass starts. I challenge anyone not to be in awe every single time you drive through it.

Anyway, we arrived at Speedwell Cavern, thankfully appropriately dressed as I reckoned it would be chilly inside and it was. We went to the little gift shop next door to announce our arrival, bought a cup of tea and then we were ushered through for our turn. To our relief we were grouped with only one other family as we saw later on how busy it can get. Hard hats were donned and we were taken through a door to the top of 106 stairs (I know this because the young daughter of the other family carefully counted them going up and down).

Down we went and to my surprise we ended up on a little jetty on an underground stream that led into a tiny tunnel. Now I understood the hard hats. After a bit of a safety briefing, we sat in the boat and off we trundled. The boats were sort of large metal row boats which had been retro fitted with electric motors. We literally bumped our way down the tunnel, keeping our heads down.

Eventually we arrived at the cavern itself.

I have to admit to feeling somewhat underwhelmed here. There wasn’t much room and on our arrival the large party there got into our boat after we alighted and left us there. The cavern may have been high, but it wasn’t particularly wide: I had in mind something more akin to Journey to the Centre of the Earth.

However, the whole trip was definitely worthwhile and a good way to pass half a day, particularly if the weather isn’t so great.

Next up was a trip to Sheffield to watch the Sheffield Steelers ice hockey game against the Glasgow Clan. This was our first experience of an ice hockey match and it was brilliant. It does seem to be very American in its format but because of that it is fantastic entertainment and very exciting. We quickly become ice hockey experts and gave each other our critique on the game (and the players 😍) as our new home team badly played their way to losing the match 5-1.

My final adventure, and trump card in my book, was to go wreck hunting on Bleaklow near Kinder Scout. There are literally hundreds of plane wrecks scattered across the moors, all meticulously recorded here including a B29 Superfortress on Bleaklow. Unfortunately we ran out of time to do this before we left. However I did manage to sneak in a walk up Thorpe Cloud and Dovedale on our return home.

If you’d like any information on any of the activities we did, don’t hesitate to ask.

This site uses Akismet to reduce spam. Learn how your comment data is processed.

Racing through the Coronavirus Apocalypse 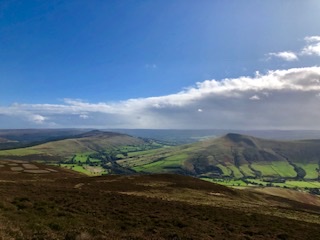 The Well Dressing 😍
A trip to the B29 Superfortress "Over Exposed" is well worth the journey. Not far off the Pennine Way and in a stunning location 😍
Spring is starting to be felt!
Lathkill Dale on a beautiful, but chilly, day with my friends @filey_forever and Jo 😎🌞❄️
Wait.... you're feeding them and not me?! 🥺😂
"Consult the Genius of the Water...."
The Wall Will Fall

Where mainstream media fears to tread

Life is a Sine Curve
glossopdaleharriers

Running in the Peak District

What I write when I’m not out running